The History of Clearfield County is deep and rich. However, since the founding of the county, there have been forces at work struggling against the humans who wished to settle and conquer this land. Specifically, the City of DuBois is a focus point for several odd and paranormal circumstances. Therefore, the Powers That Be within DuBois are waged in a constant war of maintaining Esoteric Lore about the City and its goings on. There are certain things that “the common person” just should not know, and some information that is “meant for only certain people.”  The information contained below is exactly that kind of lore.

THE GREAT FIRE OF 1888:  The Great Fire was not an accident. It was started at the Baker House to destroy a host of ghouls and ghasts that had taken up residence in the cellars, sewers, and storm drains in that section of town. Although the fire did get out of hand, it served to eradicate the evil that was lingering in the dark places of DuBois.

THE DUBOIS MANSION:   Few understand that the DuBois Mansion was demolished because it provided access to an active and powerful gateway to another dimension inhabited by strange and alien creatures. The gateway was sealed off, and the spire on Monument Hill is empowered with great magicks that keep the gateway closed. That is why the exact placement of the statue was so very important because the face of the monument must glare directly towards the sealed gateway.

THE DUBOIS MONUMENT:  A few individuals in town still understand that the Monument was placed high on the hill in a certain fashion to allow it to gaze out on the city. The monument itself has been empowered with several enchantments, and Symbols of Power (including Elder SIgns) to help ward away Evil within the city. However, in the places where the Monument’s eyes cannot see …. evil can linger.

SANDY TOWNSHIP BUILDINGS:  It is a little known detail that Sandy Township Zoning and Code Enforcement Officer, is actually a member of the Hoffman Institute. The recent forays in demolishing old buildings in the area is an attempt to roust out and slay several ghouls and ghasts that have been surfacing in the area. Apparently, the creatures are making a comeback some 125 years after they were burned out of the city in the first place. 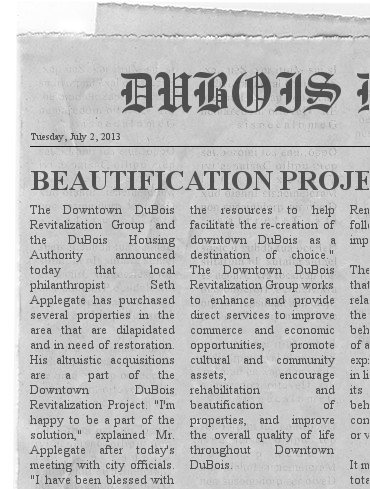 SYMBOLS PAINTED IN DUBOIS:  It doesn’t take much investigating to find out that the strange symbol that looks like an eye surrounded by three Y’s is the symbol of a small church known as The Chapel of Contemplation. The Chapel has cells throughout the United States, all with a direct connection to the original Chapel built in Luthersburg in 1825. The Chapel is one of many organizations of the National Watch List of Terrorist Organizations.

STRANGE ANIMALS FOUND:  The strange alien creatures were taken to the offices of Global Technologies in DuBois for further investigation and processing. Although there is no proof at this point, many believe that these might have been some kind of mutated creatures that have been living undetected in the City Proper until the recent flooding. Although the police have no reported the fact, several transient and homeless have gone missing in the same area that the strange corpses were found after the flood. The alien bodies remain at Global Technologies in holding tanks.

NAZI OFFICER IN DUBOIS:  Dr. Franz Heimglimmer was a member of the Karotechia, and after the Allies drove the Nazis from North Africa, Franz was moved to Bergenvalden, a Polish concentration camp. From that location he frequently met and corresponded with Dr. Mengler, one of the most infamous of Nazi doctors. These discussions and letters centered on experimentation with the prisoners of Nazi aggression and hatred. Franz’s work convinced him that immortality could be achieved by controlling the spirits of the dead. It has been estimated that he murdered over 3,000 prisoners in the labs of Bergenvalden. From a recreated Egyptian crypt under the camp, he conducted rituals of immortality using ancient religious relics in the sacrifice of camp prisoners. Franz sought to control the souls of those he murdered and channel them into the acquisition of dark, arcane powers. Franz’s efforts were partially successful and hundreds of souls were permanently bound to him. Unfortunately for Franz, the Russian army liberated Poland and he was forced to flee before completing his transformation to immortality. However, Franz made use of his supernatural powers and escaped the Nazi War Crimes Trials. He fled first to Argentina where he used his power on several American diplomats, enabling him to enter the US under the assumed identity of Frank Manz. He was placed in the small town of DuBois, PA by the Federal Witness Protection Program.

VANDESTOWE ESTATE SALE:  Unknown to the general public, Vandestowe was a passionate collector and student of the Occult. Over the years, his money and international contacts has permitted him to gather a priceless collection of artifacts and curiosities from around the world. Although some of the items are junk and trinkets, there are powerful artifacts within the contents of the estate sale. Three of the most envied objects within the auction are:  Vandestowe’s manse known only as The Corbitt House, a 14th century relic known only as “The Black Madonna,” and an Athame thought to have been used by Adolf Hitler himself. The auction is private, and will be held at midnight on 7.9.13 as per Vandestowe’s wishes in his Last Will and Testament.

THE STARS ARE RIGHT:

THE STARS ARE RIGHT Cancel reply

Its all about the games. RPGs, Video games, Whatever i am playing.

Bringing you the latest Announcements, Interviews and Reviews from the Gaming Industry

Look on my works, ye Geeky, and despair!

Yet Another D&D Blog

An estranged vent on the hobby called roleplay

We play games. We make games.